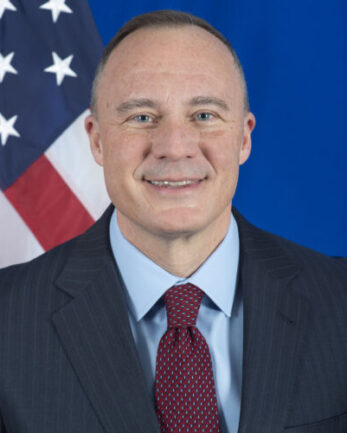 Mike Raynor assumed his duties as U.S. Ambassador to the Republic of Senegal and to the Republic of Guinea-Bissau in February 2022.  A career diplomat, he joined the U.S. State Department in 1988, and is a member of the Senior Foreign Service with the rank of Minister Counselor.  He was the U.S. Ambassador to Ethiopia from September 2017 to January 2021.  He was the Director of the State Department’s Office of Career Development and Assignments from September 2016 to August 2017.  From August 2015 to August 2016, he served as Assistant Chief of Mission in Afghanistan, with responsibility for foreign assistance, counter-narcotics, and law enforcement operations as well as the embassy’s management, consular, and security functions.  He served as the U.S. Ambassador to Benin from 2012 to 2015.  From 2010 to 2012, he served as the Executive Director of the State Department’s Bureau of African Affairs in Washington, DC.

Ambassador Raynor has spent much of his career in Africa, including assignments in Zimbabwe, Namibia, Guinea, Djibouti, and the Republic of the Congo.  He also served as Zimbabwe desk officer in the Bureau of African Affairs, Special Assistant and Legislative Management Officer in the Bureau of Legislative Affairs, and Consular Officer in Luxembourg.  His State Department awards include the Leamon R. Hunt Award for Management Excellence, several Senior Foreign Service Performance awards, and numerous Superior and Meritorious Honor awards.  He has an undergraduate degree in International Affairs from Lafayette College and a Master’s in International Affairs degree from Columbia University.  He is married with two adult children