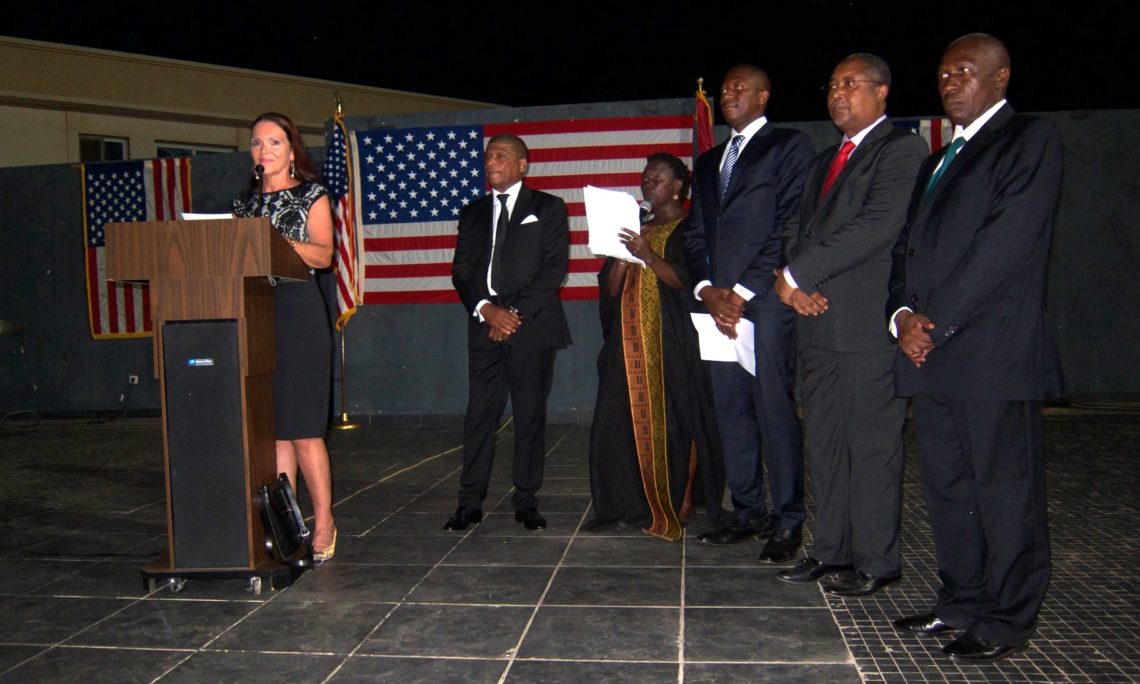 Distinguished Representative of the President of the Republic of the Guinea-Bissau,

Distinguished Representative of the President of the National Assembly,

Distinguished President of the Supreme Court of Justice, Paulo Sanha

Distinguished General Mamadu Ture, Vice-Chief of Staff of the Armed Force of Guinea-Bissau,

Distinguished Members of the Government of Guinea-Bissau,

Distinguished Members of the National Assembly,

Distinguished Special Representative of the Secretary-General of the United Nations, Modibo Touré

Fellow members of the diplomatic corps,

I am honored to be here tonight to welcome you to the celebration of the 241st anniversary of the independence of the United States of America.  My name is Martina Boustani, and I am the Chargé d’Affaires ad interim of the United States Embassy in Senegal and Guinea-Bissau.  This is my second visit to Guinea-Bissau, a country with much beauty, a vibrant culture, and generous people.

As most of you know, our actual national day is July 4, so forgive us for celebrating a bit early.

On this day we remember our struggle for independence against a powerful colonial master.  We won with determination, strong leadership, a clear sense of our mission and values, and international support.

July 4 does not celebrate a military victory, however.  It celebrates why we struggled, themes embodied in our Declaration of Independence.  Thirteen separate colonies made the decision to stand united and independent for the right to democratic self-government under the rule of law.

George Washington, whom many call the Father of our nation, clearly understood the purpose of our struggle.  He led our country to military victory with patience, forbearance, strategic brilliance, and sound judgment of the ability and character of his officers.

But military victory was not enough.  George Washington himself assumed a leadership role even more important than that of military hero.  Under his watchful eye, we pieced together a Constitution based on separation of powers between three co-equal branches of government, and a system of checks and balances.

He became our first president and one of our most respected because he made the Constitution work in practice.  He appointed talented men to office who were patriots, dedicated to the common good, not to personal gain.  He respected the authority of Congress and the Supreme Court as separate sovereign branches of the government.  In the process, his leadership insured that we developed strong institutions of democracy.

A military man himself, he understood the importance of treating the military and the war veterans he once commanded with respect and dignity; he carried out a program of granting them lands on the frontier of the new nation for their service.  By so doing, he firmly established the principle of civilian control of the military.

In a word, he laid the foundations of the institutions of our constitutional republic.

Perhaps President Washington’s most impactful and enduring act came in the final year of his presidency, when he declined to run for another term.  By so doing, he set the precedent for leaving political office and passing power to another person.  His example and his legacy have served us well in the more than two centuries since.

As I look at you and your country today, I see a special place.  Your legacy is rich: West Africa’s great indigenous empires thrived in the interior long before Europeans arrived.  Your magnificent coast was the center of the trans-Atlantic slave trade, now so well remembered in the new Museum of Slavery in Cacheu.  Millions of Americans now can trace their DNA to Guinea-Bissau. Some have started to come to visit as tourists, as they do in larger numbers to Senegal and Ghana.

Our histories also intersect on your island of Bolama. There, in the middle of the town, once stood a statue of American President Ulysses S. Grant.  And the primary school there is named the Ulisses Grant School.

Grant is known to most Americans as the man President Abraham Lincoln named commanding general of United States Army, the general who won our Civil war and ended slavery.   Here, though, you remember him as a peacemaker.  You remember him as chairing the landmark international arbitration between Portugal and Great Britain that granted Bolama to Portugal.

Grant, the war veteran and hero of the Union, lead the first important international arbitration, resolving the conflict without firing a bullet.  All parties agreed beforehand to agree to comply with the decision of the arbitration board, headed by Grant.  And once that the decision was made, the parties complied.  Grant saw that international arbitration offered a way to a better future where justice could prevail and war averted.  This is the Ulysses S. Grant that you commemorate in Bolama.

Guinea-Bissau has moved forward in important ways over the past three years.  You conducted free and fair elections in 2014, peacefully, orderly, and with support from your international partners.  Despite the constant changes of government since then, there has been no violence.  The country remains at peace. Unstable as the country appears politically, a constitutional rule of law prevails.  The military remains in its barracks.  The media is largely free and lively. These are all signs of progress as you try to work to strengthen the institutions essential to a stable, democratic society.

But you haven’t made progress alone.  You did it in part because of the wisdom you displayed when you asked for help.  International support has been essential.

The ECOWAS Military Mission in Guinea-Bissau—ECOMIB—has helped provide security to your political leadership since the aftermath of the coup of 2012.  Its presence has reminded and reassured your country that your neighbors are engaged and committed to stabilizing Guinea-Bissau under the constitutional rule of law.  We commend ECOWAS’s decision to extend ECOMIB’s mandate three months. This helps assist the country’s stability during a time of heightened political tension.

At the same time, at the request of Guinea-Bissau’s political leadership, ECOWAS has sought to mediate a resolution to the current political impasse.  The Bissau Accord, followed by the Conakry Accord, came as result of all the major political actors, or their representatives, sitting down at the table and agreeing to a process to govern the country through the legislative elections scheduled for next year.

As the UN Security Council has stated, these accords stand as the country’s best way out of the political impasse.  I note that the PAIGC has commenced the process of reintegrating the 15 dissidents, an element of Conakry. We look for President Vaz to name a consensus prime minister, the first element, followed by an inclusive government.  All parties can count on the support of the United States, through the United Nations and ECOWAS, as they implement these accords.

Let me underscore the hard work of the UN in Guinea-Bissau—UNIOGBIS.  The United States has strongly supported its presence and mission since its inception.  Its political arm and its various international organizations contribute much to the people of Guinea-Bissau. We commend the leadership of Special Representative of the Secretary-General, Modibo Touré, an outstanding representative of Secretary-General Antonio Guterres.

The United States is committed to the people of Guinea-Bissau.  As you have seen, we have upgraded our limited presence here. We have expanded our programs.  These include support for fighting drug trafficking, building law enforcement capacity, supporting the World Food Program’s school feeding program, and strengthening your public health system’s ability to respond to epidemics.  We will continue to work with your military, focusing on civil-military relations and encouraging it to participate in regional and international exercises and training.

Let me close by observing that Guinea-Bissau can – and should be – a model for the rest of Africa in a fundamental way.  Here in the strategic heart of the West African coast, you have forged a society where tolerance is the rule, where ethnic, racial, linguistic, and religious differences come together to make you stronger.  You are evidence that the whole is greater than the sum of parts, something that we Americans also understand.  May Guinea-Bissau shine the light of tolerance through the continent and beyond.

Thank you very much for your attendance tonight.